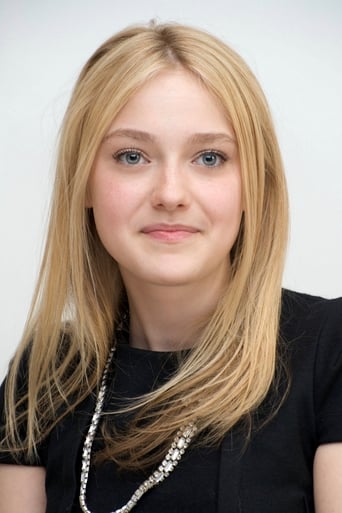 Hannah Dakota Fanning (born February 23, 1994), better known as Dakota Fanning, is an American actress. Fanning's breakthrough performance was in I Am Sam in 2001. As a child actress, she appeared in high-profile films such as Man on Fire, War of the Worlds, and Charlotte's Web. Fanning began the transition to more adult roles with Hounddog and The Secret Life of Bees. Recent films have included The Twilight Saga and The Runaways. She has won numerous awards and is the youngest nominee for a Screen Actors Guild Award.

Hollywood
Drama ,
90
min
The Benefactor
A newly married couple are forced to navigate the all-consuming interest of a powerful, mysterious, and possessive philanthropist..
Trailer Watch Now

Hollywood
Mystery ,Thriller, Western,
148
min
Brimstone
In the menacing inferno of the old American West, Liz is a genuine survivor who is hunted by a vengeful preacher for a crime she didn’t commit..
Trailer Watch Now

Hollywood
Comedy ,Drama,
93
min
Please Stand By
A young autistic woman runs away from her caregiver in order to boldly go and deliver her 500-page Star Trek script to a writing competition in Hollyw...More.
Trailer Watch Now

Hollywood
Drama ,
110
min
Sweetness in the Belly
Lilly, orphaned as a child, experiences her parents homeland of England, escaping civil war. She becomes the heart of a disenfranchised community in L...More.
Trailer Watch Now

Hollywood
Romance ,Drama, Music,
105
min
Viena and the Fantomes
A roadie travels across North America with a punk band in the 1980s..
Trailer Watch Now

Animation
Animation ,Comedy, Family,
68
min
Lilo & Stitch 2-Stitch Has a Glitch
Now, we find the rowdy extraterrestrial getting used to life with his new ohana. However, a malfunction in the ultimate creation of Dr. Jumba soon eme...More.
Trailer Watch Now

Animation
Animation ,Family, Fantasy,
100
min
Coraline
When Coraline moves to an old house, she feels bored and neglected by her parents. She finds a hidden door with a bricked up passage. During the night...More.
Trailer Watch Now

Animation
Animation ,Family, Comedy,
90
min
Yellowbird
Yellowbird lives in the ruins of an old house. He lacks the confidence to leave his home, no matter how much Bug, his labybird friend, tries to convin...More.
Trailer Watch Now