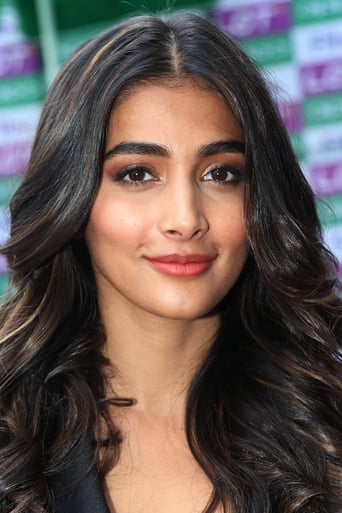 Pooja Hegde is an Indian model and actress. A former beauty pageant contestant, she was crowned as the second runner-up at the Miss Universe India 2010 competition, before going on to make her acting debut in Mysskin's Tamil superhero film Mugamoodi (2012). She then featured in the Telugu films Oka Laila Kosam and Mukunda (2014), while signing on to feature as the lead actress in Ashutosh Gowariker's Mohenjo Daro (2016).

Tamil
Action ,Drama,
162
min
Aravinda Sametha Veera Raghava
After participating in a brawl that left his father dead and his rival nearly dead, a young man decides to stay away from violence and leaves his vill...More.
Trailer Watch Now

Tamil
Action ,Thriller,
173
min
GADDALAKONDA GANESH
Abhi wants to make a feature film with an antagonist as his lead and finds the perfect muse in the ruthless Gaddalakonda Ganesh. How he finally manage...More.
Trailer Watch Now

Tamil
Drama ,Action,
176
min
Maharshi
Rishi Kumar is a billionaire and the CEO of Origins, someone who has always strived for the success he now owns. His friend Ravi needs help, how will ...More.
Trailer Watch Now

Bollywood
Adventure ,Drama, History, Romance
155
min
Mohenjo Daro
During the Indus valley civilization, an Indigo farmer strives for the justice and protection of the city of Mohenjo-Daro and its civilians from an ev...More.
Trailer Watch Now

Bollywood
Comedy ,Drama,
142
min
Housefull 4
Three couples who get separated from each other due to an evil ploy, reincarnate after 600 years and meet each other as history repeats itself again a...More.
Trailer Watch Now

Hindi Dubbed
Action ,
142
min
Mukunda
Set in a small town in Andhra Pradesh, the film revolves around a youngster, Mukunda, who challenges the domination of the Municipal Chairman and the ...More.
Trailer Watch Now

Hindi Dubbed
Romance ,Comedy, Drama,
150
min
Oka Laila Kosam
A carefree young man leading an aimless life falls in love with a cultured and simple woman, but she does not reciprocate his emotion. However, when c...More.
Trailer Watch Now

Hindi Dubbed
Action ,Romance, Fantasy,
166
min
Saakshyam (2020) Hindi Dubbed
A group of people commit unspeakable crimes and are confident of getting away with it since there are no witnesses. But nature is witness to their cri...More.
Trailer Watch Now