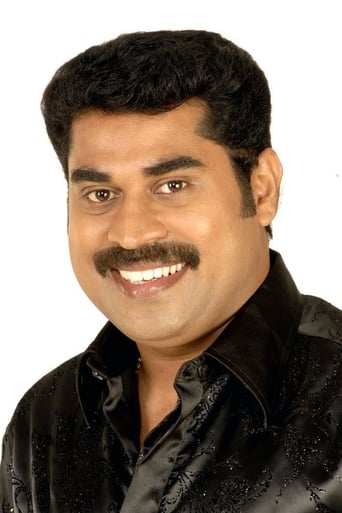 Suraj Venjaramood is a National Award winning Indian film actor and impressionist (mimic) who has starred in over 100 Malayalam films. He mainly plays comedy roles, though he has played some character roles as well. He is a three-time recipient of the Kerala State Film Award for Best Comedy Artist. In 2014, Suraj received the National Film Award for Best Actor for his performance in the Malayalam film Perariyathavar Suraj started his career as a stand-up comedian. His mimicry shows were a success with the audience. He first acted in a film named Jagapoga which was a spoof of Malayalam movies. He played the role of Pachan as well as Dadasahib in this film. He is generally regarded for his artificial mockery of the Thiruvananthapuram accent for which he is largely criticised. So far Suraj has acted in more than 100 films and have played the lead character in the films Duplicate and Thaskara Lahala. He is known for acting in the films Arabikatha, Ivar Vivahitharayal, Annan Thambi, Veruthe Oru Bharya, LollyPop, Gulumal: The Escape, Sakudumbam Shyamala, Adaminte Makan Abu and Perariyathavar. He won the National Film Award for Best Actor at the 61st National Film Awards for the film Perariyathavar, directed by Dr. Biju. The story of the film revolved around a father and son working as Municipality workers and the harsh life they face. Noted filmmaker and jury chairman Saeed Mirza, while announcing Suraj's award in a press meet, said: "Suraj has played a municipal sweeper [in the film] but it is an incredibly dignified performance. He excels in comedy but in this film Suraj has brilliantly played a reticent character. I would not have been able to sleep had his name not been in the list of awardees."

Tamil
Comedy ,Romance,
144
min
Theevandi
Theevandi is a political satire depicted through light humor where the protagonist Bineesh hardly knows a thing even about himself..
Trailer Watch Now

Hindi Dubbed
Comedy ,
133
min
Cousins
Sam is stuck somewhere in the past, courtesy a mishap that occurred six years back, that had almost cost him his life. The psychiatrist suggests that ...More.
Trailer Watch Now